A native of Baltimore, MD, Josh developed a passion for sports at a young age, with a specific love for baseball. Josh competed for 4 years in collegiate baseball while attending Baltimore City Community College (MD), Georgia College (GA) and Notre Dame College (OH). During his college career, he was a 3 x All-Conference Player.​Following college, Josh pursued professional baseball. This experience was brief but memorable, while he spent time with the Chillicothe Paints in 2008 (of the then Frontier League).
​Josh began coaching baseball in 2008 full time with a Cleveland based program named Aspiring Athletes. During this time, he was able to learn and develop training programs for youth and high school Baseball and Softball players. ​In 2010, Bieneman was named the Varsity Hitting & Catching Coach at St. Ignatius High School. During his 5 seasons at St. Ignatius, he coached 2 players that moved onto the professional level, including 1 in the MLB. In addition, in 2010, he was named the 15u Head Coach for USA Baseball Ohio Valley NTIS, where in 2010-2011 he coached 8 future professional players, including 1 in the MLB.
​Josh founded Force Ohio Baseball in 2012. During his 8 years at Force, he was able to assist in developing over 100 players that moved onto Collegiate baseball, including 24 to the Division 1 level. He also ran D1 Prospects Camps from 2016-2020, which brought in over 100 Division coaches to events in several states.
In 2015 Josh began as an Associate Scout with the Boston Red Sox, assisting with Northern/Central Ohio. He stayed in this role until 2018 when he accepted the same position with the Los Angeles Dodgers, assisting with Ohio and Michigan. He is currently with the Dodgers.
Along with his wife Heather and two children Taydem and Brooks, Josh resides in Northfield, OH. 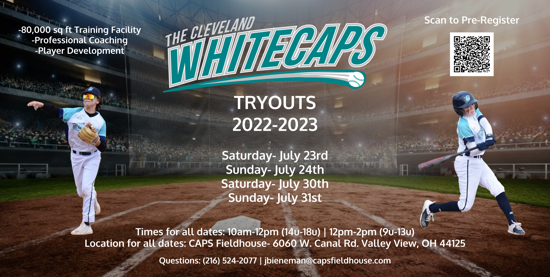 Club and Team Tryouts are held each July and August.  If you are currently interested in trying out for a Cleveland Whitecaps Baseball team,  please complete the tryout form and request to be contacted to set up a date and time.
Caps Fieldhouse - 6060 West Canal Rd.,  Valley View. Ohio   44125

If you have been notified and accepted into the Cleveland Whitecaps Baseball Club, please click below to "officially" register for the season.
You will need to download:
1.  Copy of players birth certificate
2.  Head shot photo

The Cleveland Whitecaps Baseball Club is founded to create a Family friendly, competitive culture in which individual players can aggressively pursue their personal player development, while also learning and growing within the team environment. We are committed to each player's greatest aspirations in this All American game. Our goal as Coaches and teachers is to challenge and inspire growth not just for one season, but for future goals in baseball and in life.

The Cleveland Whitecaps organization is data driven and the program will include Rapsodo Hitting Machine. The key to data is application and with years of hands on experience, Josh Bieneman and the staff will be using each player's data to help create the best player development models for each Whitecaps player. Every player will have their own personal log in to see and chart their swings and swing results all offseason.