A minimum of eight Masters/Veteran teams from different countries are invited and welcome to participate in this unique 5-a-side World Cup Football event.  Teams consist of 7 or more players that must meet the team age requirement.   Each team is guaranteed 6 to 8 games per day with a total of about 100 minutes of total playing time. Two fields will be split in half, allowing four games to be played at once.  The tournament will last three days.  Day 1 and Day 2 are generally round-robin group games.  Day three is for special competitions and playoffs and finals. 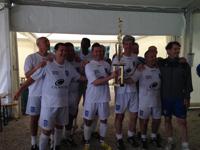 Rules can be updated/changed as late as the night before competition.  Please be certain that your team captain is present at the Capt's meeting in the event of any changes.

Player safety is our highest priority.  The referees will be instructed to give an immediate red card to anyone considered to be attempting to jeopardize the health or safety of any player. A red card for violent play is an automatic three game suspension (the game played in plus two more games). Any red card will be reviewed by the tournament committee with a consideration of additional games added.  Intent will be the primary factor considered.

The tournament rules are FIFA rules with the following exceptions:

Home Team (listed first on schedule) will get the kick off.  Visitors have choice of end.  If ref determines a change of jersey is needed, it is the home's team responsibility to change.

Goalkeeper will begin play when there is a goal-kick or any goals are scored with the ball in their hands.  Opponents must start outside the box.  The keeper may throw the ball or place it on the ground.  Immediately when the ball is on the ground, it is live and can be challenged by the opponent. There is no restrictions that the ball must exit the keepers box to be in play.  There is no restriction on where the keeper may distribute the ball (over half line etc..).

Keepers may put the ball on the ground at which time they become field players and may kick the ball to any part of the field.  Like any field player, they are also able to be tackled by opponents.  Keeper may not handle a ball from a teammates pass back.  FIFA rules apply.

All players are free to enter the box and play the ball.   Penalty spot will be in proportion to the penalty box and size of goals, and will be agreed to by the tournament committee prior to the start of the tournament.

The traditional "throw in" for the ball going out-of-bounds, is a dead-ball kick in, taken from the spot on the sideline where the ball exited the field of play.  The kick is indirect.  Corner Kicks have no restrictions.

Free Kicks are either direct or indirect according to FIFA rules and the referees discretion.  Players may line up four meters from the ball.

There are NO OFFSIDES.

Winners are determined by total points.  Points are as follows:
Three (3) for a win
One (1) for a tie
Zero (0) for a loss

Tie Breakers are as follows:

Games ending in tie will play 5 minutes additional time golden goal.  Visiting team gets kickoff to start extra time.  If no goal is scored in the 5 minutes added, the game will go into a penalty shoot out.  Five players from each team on the team roster for the game (not necessarily on the the field at the end of the game) will shoot first.  If still tied after 5 shots each, continue with sudden death penalties 1 v 1 for each team.  If all players on the roster have shot once then they start again in the same order.  It is likely that teams will have different roster sizes so while players shoot in the same order, the most likely will not match up against the same opponent.